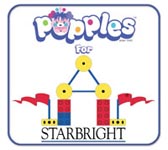 These nine one-of-a-kind Popples were designed by famous celebrities and designers and sold on eBay in November 2002 as part of a charity auction called “Popples Pop Culture Charity Design Auction” sponsored by Toymax and Starbright Foundation. Starbright Foundation is a non-profit organization chaired by Steven Spielberg and General H. Norman Schwarzkopf to benefit seriously ill children. The auction was a rare opportunity for fans and collectors to bid on the unique Popples plush along with the original autographed designs created by each celebrity.

The celebrity designers include fashion designers, actresses, talk show hosts, and musicians who all remembered the Popples from the 1980’s. Each celebrity was provided with a blank Popples black and white line drawing, a box of colored pencils and an invitation to add extra flair by including a personal signature item. The nine celebrity designers have taken the time to color, customize, and in some cases, even “name” their own unique Popples. Each cuddly Popples pal has a celebrity signature printed on its left foot.

The Celebrity Popples and their designers are: